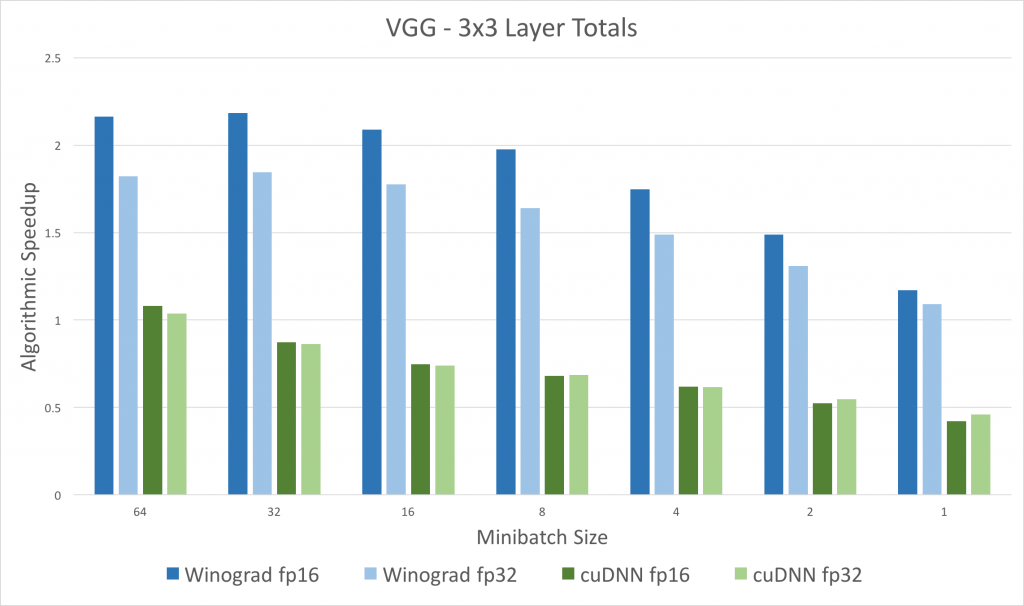 “Not so fast, FFT”: Winograd

Deep learning thrives on speed. Faster training enables the construction of larger and more complex networks to tackle new domains such as speech or decision making.

We have implemented the Winograd algorithm on GPUs and benchmarked performance and convergence on state-of-the-art networks. Depending on the network architecture, training with Nervana’s Winograd algorithm yields speed-ups of 2-3x over NVIDIA’s cuDNN v4 kernels.

We benchmarked speed on:

Performance was measured in units of algorithmic speedup. Computation speed (e.g. images/second) was normalized to the maximum theoretical speed of the direct convolutional approach.  Values above one indicate how efficiently a faster algorithm is implemented.

For the 3×3 layers of the VGG model, Nervana Winograd is up to 3 times faster than cuDNN v4 (see Figure below). These speed-ups were also realized when we measured the end-to-end forward propagation and backward propagation times. We obtained similar results with GoogleNetv2 and MSRA networks. Not only is Nervana Winograd fast, but also numerically accurate. For example, AlexNet convergence is exactly the same as with direct convolution, as shown below.

These results are also confirmed by third-party benchmarking. Our Winograd implementation is open-source, and can be found in the latest release of our deep learning library, neon.  Look forward to a forthcoming part 2 with more technical details on Nervana Winograd. We are actively working on improving Nervana Winograd to allow your networks to train faster and handle more complex problems.